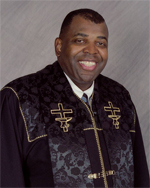 Rev. Gladney received his call to the ministry at the age of 15 and entered the ministry at the age of 25. He was licensed and ordained by the New Willow Baptist Church, Leesville, Louisiana, in 1983. He later joined Bethel African Methodist Episcopal (AME) Church, Leesville, Louisiana, and was assigned as the Pastor of Bethel AME Church, Leesville, Louisiana, in 1984.  Bishop Donald George Kenneth Ming, the Presiding Prelate of the Eighth Episcopal District, also appointed him as the Pastor of Grover Chapel AME Church, Glenmora, Louisiana, and Bethel AME circuit.  He was ordained an itinerant elder in 1986, and transferred to the Ninth Episcopal District (Anniston, Alabama) where Bishop Frank Madison Reid, Jr. appointed him as the Pastor of Saint James AME Church, Goodwater, Alabama.  Upon his assignment to Germany in 1991, Bishop Frederick Hilborn Talbot approved him to serve as the Pastor of the Zweibruecken Gospel Service, Zweibruecken, Germany.  He returned to the United States in 1993 and served as an associate minister at First AME Church, Manassas, Virginia.  Bishop Frederick Calhoun James appointed him in 1994 to “a Ministry without Walls” where he served as the Pastor of the Prince William County Jail.  In February 1997, Rev. Gladney founded the Emmanuel AME Church, Stafford, Virginia, where he continues to serve as the Pastor.

Rev. Gladney has made tremendous contributions to both the church and community while serving at each of his pastoral assignments.  One of his significant contributions was purchasing three acres of land and initiating the building a new church facility for Saint James AME Church, Goodwater, Alabama.  He continues to make contributions by preaching at various churches and inspiring congregations to keep moving, “Onward and Upward – Advancing the Kingdom of God.”  He is deeply committed to serving God and fulfilling his calling as the Founder and Pastor of Emmanuel AME Church.

Rev. Gladney is married to Arlene Sabrina Gladney and they are the parents of a daughter, Jelonda, and son, Jonathan.

Update Personal Details
Your ticket for